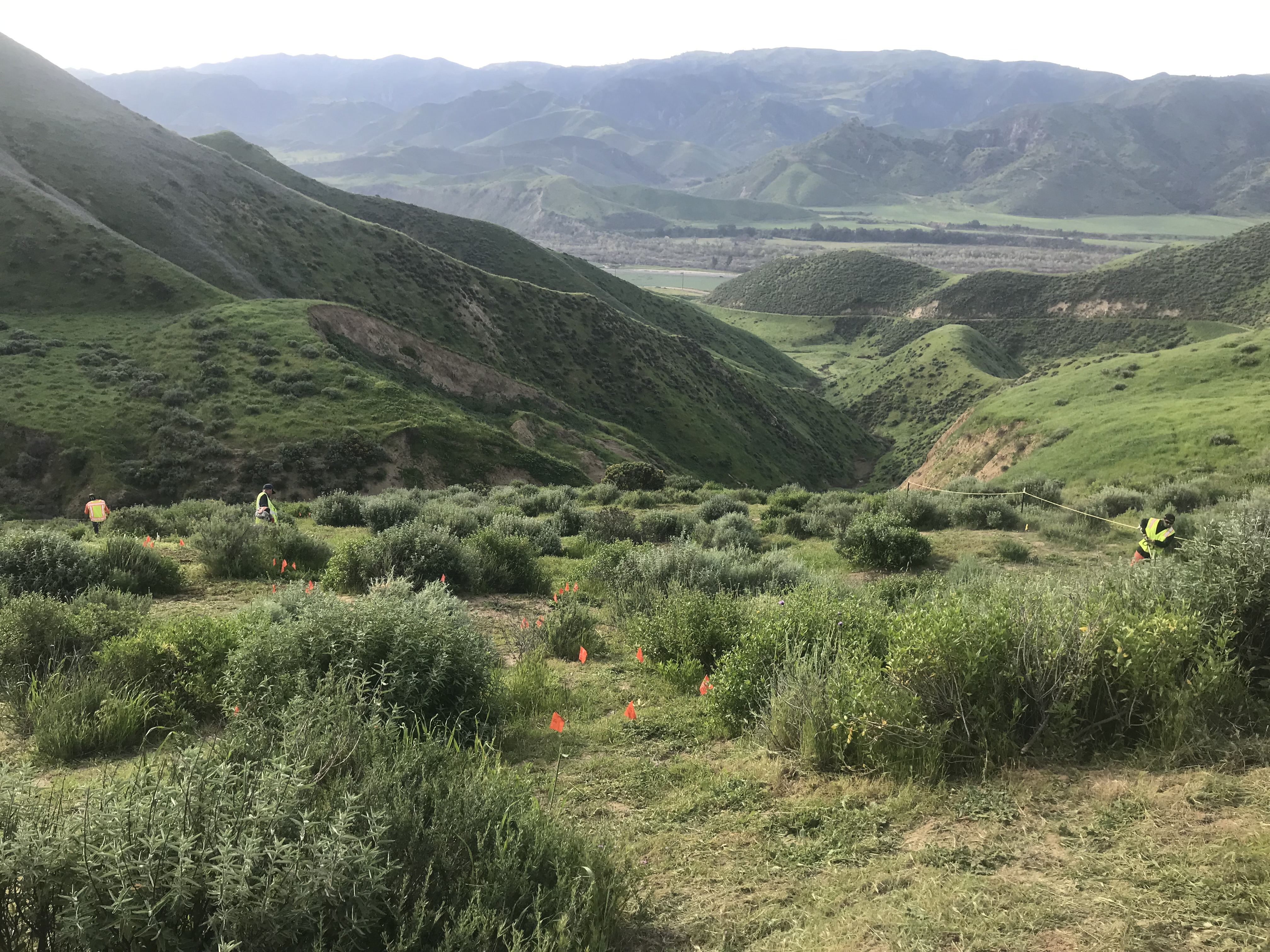 Dudek and HRS spread seed in 8 locations, totaling approximately 3 acres, within the hills of the Santa Clarita Valley, Los Angeles County, and have seen thousands of plants germinate. Many of the newly germinated plants are beginning to flower as of the writing of this update (April 2019).

Dudek Habitat Restoration Specialists selected re-introduction sites based on 11 physical characteristics expected to be critical to the survival and persistence of San Fernando Valley Spineflower, and in consideration of the success of experimental seeding trials at 10 preliminary sites.

Dudek and HRS assisted with implementation of San Fernando Valley Spineflower seeding trials for two years starting in 2016. This experiment tested installation and maintenance methodologies for their effectiveness in supporting and enhancing San Fernando Valley Spineflower survival and reproduction. Lessons learned during this two year trial period have been included into the implementation of the current re-introduction effort.

Once thought to be extinct, the discovery of San Fernando Valley Spineflower threatened to be a major constraint to development at Newhall Ranch. Dudek has been working diligently with the client to conserve the species since its rediscovery nearly two decades ago.

The project has proved to be a success in its first year, according to the US Fish & Wildlife Service.

The foundation for this re-introduction work was set by the Spineflower Introduction Plan, prepared by Dudek, which credibly led to the withdrawal of a petition to list the species by the USFWS under the federal Endangered Species List. The plan integrated years of work on San Fernando Valley Spineflower with the intent of protecting the species from extinction. The USFWS action was an admission from the federal government that the Spineflower Introduction Plan, if implemented faithfully, would reduce the threat of extinction for San Fernando Valley Spineflower below the level that would require federal listing under the Endangered Species Act.

Restoration Ecologist Jake Marcon has been managing this project for Dudek since installation activities began. “Andy Thomson set the foundation for this work through the completion of the Spineflower Introduction Plan, and I’ve been able to pick up where he left off and begin implementation along with significant support from HRS,” said Mr. Marcon. Dudek Habitat Restoration Specialist/Principal Mike Sweesy and Habitat Restoration Specialist Lindsy Mobley have provided significant contributions to re-introduction planning and implementation.

HRS’s Kyle Matthews, Kevin DiSabatino, Martin Correa, and Ernesto Espino Jr. have provided critical field expertise during installation and maintenance of the re-introduction sites. “Consistent communication between the entire project team and utilizing the expertise of all involved has been key and will continue to be key in achieving the project’s goals,” said Mr. Matthews.

Dudek and HRS will continue to work with FivePoint over the next decade or more to ensure the long term success and sustainability of this program.

For more information, contact Kyle Matthews and Jake Marcon. Follow us on Twitter and LinkedIn to ensure that you’re kept up to date on the latest developments.